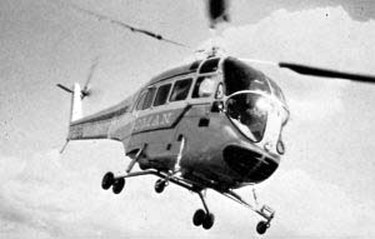 Doman Helicopters, Inc., was founded in 1945 and set up company headquarters in a cow pasture in Stratford, Connecticut.  Glidden S. Doman and a handful of enthusiastic engineers went to work to create a better, safer helicopter.  Seeking to solve many structural and dynamics problems, including blade failures, which were plaguing helicopters of the era, Doman and his team developed a new rotor system.

Over the next twenty-five years their ships attracted the attention of the US military, and both domestic and foreign commercial markets.  Based primarily in Danbury, Connecticut, the company also set up shop in Pennsylvania and Puerto Rico.  Its ultimate product was the LZ-5 (also known as the YH-31 and the D-10.)  It was FAA certificated in 1955 and attracted numerous contingent commercial orders, but not sufficient to get it into quantity production.

In 1947 Doman purchased an R-6 helicopter from the Army Air Corps for $1.00!  A new Sikorsky/Nash Kelvinator machine, still in its crate, it was made available so that Doman could proceed with the testing of its new rotor design, without the need of building an entire helicopter on which to mount it.

The radically different new rotor system was met with  great enthusiasm by the Army Propeller Laboratory at Wright Field, which provided funds for further flight testing.  Prospects seemed rosy for the future of the fledgling company.  After rotor testing on the R-6, Doman proceeded to design and build a new model, the CW-40, in partnership with Curtiss-Wright.  Built by Doman for licensee Curtiss-Wright, Army M.A.S.H. pilots flew it and loved it and their comments were later incorporated in the YH-31 design.  The only CW-40 built was destroyed by Curtiss shortly before it might have been acquired by the newly formed New England Air Museum.

The final model built by Doman Helicopters was developed, FAA certificated, extensively flown and variously called the LZ-5, YH-31 and D-10.  Known to the Army as the YH-31, they purchased two of them and tested the ships extensively.  Today some of their pilots still rave about the wonderful flying qualities and "finger tip control" with which they could fly the machine.  The Army was eager to see the ship go into major production, but their plans were thwarted by the Air Force, which did not want to see a helicopter in use that they had not had a hand in developing.  Afterward, Doman spent several years demonstrating this model and obtaining contingent
contracts for commercial sales in the U.S., Canada, Italy and France, but was unable to secure the necessary financing.

The LZ-5 ship which is currently on display at the New England Air  Museum, outside of Hartford, Connecticut, was flown in a couple of versions of commercial paint, as well as in military colors over the years.  It was acquired by NEAM in 2009 from the Hiller Museum in California, where it had been on display in the military configuration, and was restored to Mr. Doman’s favorite paint scheme, in which the LZ-5 flew at the 1960 Paris Air Show.  This ship is the only survivor of its kind.
The Doman Family has put together the history of Doman Helicopters, Inc.  A 25-minute video was made from Glidden Doman's original 8mm movies, narrated by Glidden Doman; a transcript of an interview given by Mr. Doman in 1995 (approximately 70 pages) and a collection of more than 200 photos are also available.  All three items are now available on USB drive, for $35 each, or as a set for $90.  Emailed files may also be available, via Drop Box.

To order your copies of the Doman Helicopters Historical Media package,
please contact The EPCo Group through the dropdown menu in the "Contact Us" tab.